Left Handed – In Store “Last One”

Our Twenty-Ninth Broadcaster has just arrived. For the lucky customers that own one, they just keep raving about there Broadcaster!

Last of the 70th Anniversary Broadcaster’s. Fender are no longer taking orders, only filling back orders. Pics not of actual guitar.

Fender changed the music world forever in October 1950 with the first dual-pickup electric Spanish guitar—the Broadcaster®. The instrument vaulted Fender into the mainstream of electric guitar, with gorgeous features and smart innovations including an ash body with a translucent blonde nitrocellulose finish, sturdy maple neck with rear-installed truss rod for solid stability (with a walnut “skunk stripe”), single-ply black phenolic pickguard, two loud-and-clear pickups and versatile wiring for three distinctive tone settings. Revolutionary as it was, however, the Broadcaster was short lived—produced only for a couple months until January 1951 because of an already-existing trademark on the name held by the Fred Gretsch Manufacturing Company, Inc.

Each Custom Shop Limited Edition instrument is only available for a short time, which makes it eminently collectable and adds to its investment value. Crafted with many features reserved only for certain artists and master built instruments, they are just what the name says they are: highly anticipated limited-edition models that go very quickly. 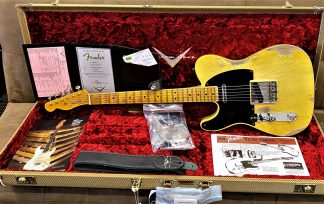