Info in most part from Woodstock Guitars

To commemorate the 50th Anniversary of VOX guitar amplifiers, Vox introduced the AC15H1TV. As the ultimate collectible AC15, Vox issued the AC15H1TVL in a mahogany “TV front” enclosure. This amplifier, like the others in the Heritage Collection, will transport you through the golden age of VOX tone, combining the prized EF86 preamp channel of 1958 with the 1963 Top Boost channel all in one amplifier. Add in some modern tone shaping control enhancements and the result is perhaps the finest VOX amplifier in the company’s 50 year history.

EF86: The tube with the magical VOX tone

What is it that makes EF86 based VOX amplifiers sound so good? Maybe it’s the way the amp naturally overdrives. Or maybe it’s the raw power of the creamy distortion as you crank the amp all the way up. Whatever it is, there is an undeniable magic about this period of VOX amplification. The EF86 Pentode tube is at the heart of this elusive tone, and for many years, the EF86 tube was not available in production quantities. Fifty years later, the magic returns.

Loads on info and pics here … 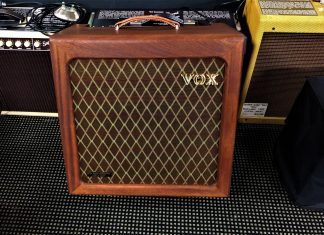