Mark Sampson started Matchless while living in Hollywood, California in 1989. He, along with partners Rick Perotta, Steve Goodale and Chris Perrotta were the initial force behind the company, often working on Rick’s kitchen table. When Rick and Mark started working on their first prototype amp, the C-30, they wanted it to sound significantly better than the amplifiers that were currently being mass-produced. They also wanted their amps to take the rigors of the road and remain completely reliable for musicians who played night after night.

Chris explains “A lot of work went into those early prototypes. Mark and Rick worked tirelessly perfecting the amp’s pre-amplifier section and tone circuits. They were very passionate about it. They’d spend hours reverse-engineering older transformers by unraveling them and counting every turn of wire. They’d experiment with different speaker combinations and speaker modifications.”

As part of their research, they’d solicit working musicians to play through the prototypes. By listening to their feedback, they’d incorporate those desirable changes into the amp design. Rick explains “During that time, some of the components were getting very difficult to find because the whole industry had embraced semiconductors and was going away from the older vacuum tube technology. Most of the well known tube manufacturers had either shut down production or sold off their tooling to other countries. We had to hunt down and purchase NOS (new old stock) tubes that were warehoused in small lots across the country. We also had to import tubes from other countries. Often, those tubes had a very high rejection rate and didn’t make the grade, many had to be scrapped out. We had difficulties finding other components as well, like large carbon-composition resistors. Even commercially available transformers didn’t seem to do the trick. In the end, we had to have them hand wound in small batches by a private company. The transformers were by far the heaviest and most costly part of the amp; they needed to be because they were the heart of it. It wasn’t just about the amp’s power, it was also about delivering punchy, clear, complex voicing. Naturally, the amps were very labor intensive to construct. Just one DC-30 amp took over 13 hours to complete. Because the amplifiers were so costly to make, we didn’t know if customers would actually buy them. After all, it was like taking a step backwards into an older “garage technology” and then asking more money for it.”

As prototyping neared completion, Mark and Rick came up with the name MATCHLESS—because that’s what they intended their “no-compromise” amplifier to be. Chris designed the amp’s trademark light-up logo. Steve Goodale joined them as a co-founder in 1991, bringing financing and marketing to the company. Goodale insisted that they participate in the 1992 Guitar Player Magazine boutique amplifier shootout by delivering an early DC-30 (Dual Combo 30) from Los Angeles to Cupertino. The amplifier wound up in the hands of editor Andy Widders-Ellis from Guitar Player Magazine. The amplifier won first place [1] and effectively helped launch the company.

Mark Sampson went on to design the Clubman 35′, followed by the 15 watt series consisting of the Spitfire, Tornado, and Lightning. This series was followed by the Chieftain, Superchief, and Thunderchief. These models were all designed while the company was in the early stages of its development in North Hollywood, California. The models created following the C-30 series were an attempt by the company to create a unique entity within the market place. While Mark was the chief design engineer, Rick handled production duties and administration with much overlap in job duties as the company grew. Chris handled computer related assignments, CAD engineering and purchasing.

Due to the growing demand, the founders elected to become partners with the U.S. Music Corporation in January 1994. This merger was done to acquire much needed growth and capital. During the partners tenure at U.S. Music, Mark Sampson became head of Corporate R&D which consisted of Guild guitars, Matchless amplifiers, Randall amplifiers and Vinci strings. Rick Perrotta became the manager of the Anaheim production facility where Matchless, Randall, and Vinci were located. Chris Perrotta would be responsible for mechanical engineering, blueprinting, and other fine detail work for all the brands of the corporation. This merger lasted until October 1995 when Mark Sampson acquired Matchless without the other founding partners. Sampson stayed on with the company as President and C.E.O. until late 1999. 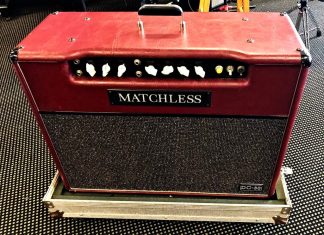