Who wouldn’t love two great Marshall distortion and gain channels and one clean channel all packaged in one amp? Nobody! The TSL 100 is a 100 watt, 3 channel, all tube head that features reverb and a whole lot of Marshall sound!

Three Tones for Versatile Playing
By giving you three independent channels and many innovative features, the all-valve TSL range puts an unheard of degree of control, flexibility and, most importantly, TONE at your finger tips. From crystal clean to the mightiest Marshall roar, the TSL does it all! Marshall amps are all about TONE and FEEL and with the TSL100, you can have three variations at all times!

The Triple Super Lead is a versatile three channel amp. Think of it as three all-tube amps, each with different circuitry.

Crunch Channel
The crunch channel is similar to the second channel on a Marshall 6100LM 30th anniversary head (Joe Satriani, Alex Lifeson-Rush were 6100LM users.). This channel is perfect for rhythm or bluesy solos depending on where you set the Gain and Volume controls. Because it’s not a hi-gain channel, when you roll back the volume on your guitar it cleans up and becomes very dynamic. It’s capable of a Marshall-style clean with a little break up as player digs into the string or adjusts the volume knob on his guitar. Texas blues? Lower the gain on the crunch channel. Increase gain = more aggressive with a looser mid-range.

Lead Channel
The lead channel is voiced like the crunch channel (loose open midrange) but with a lot more gain for leads or heavy rhythm playing. High-gain settings still have great note definition and sustain. Many competing amps lose note clarity as gain increases. The sound becomes a buzzy mess and the notes in extended/altered chords are lost but Marshalls deliver high-gain with definition. It will still clean up with lower gain settings or by backing off the volume on the guitar (very, very dynamic and touch sensitive). With high gain settings, the dynamics and response will follow every note without blurring. With fast legato lines, the amazing sustain will bloom into controlled feedback hanging on as long as you want. Ideal for singing, sustaining lead tones.

Clean Channel
The Clean channel is Fenderish with no breakup (distortion) as the volume increases. Clean, clean, clean with no breakup, but, because it has a gain and volume control, you can add a little breakup for a bluesy type of tone. For a clean, no breakup tone, crank the volume, then slowly bring up the gain. For a bluesy tone set the gain for the right amount of grit and then bring up the volume. Great for Jazz, chicken pickin’, country and funk. 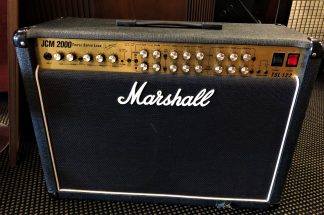