It’s been 50 years since Jimi Hendrix took the world by storm with his incredible Monterey Pop Festival performance, which he concluded with the sacrificial burning of his now-iconic hand-painted Stratocaster. Destroyed during the fiery culmination of his set, this one-of-a-kind guitar survived only in photos and film. To celebrate the 50th anniversary of this milestone in music history, we created the limited-edition Jimi Hendrix Monterey Stratocaster. 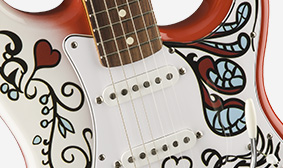 The guitar’s body art is an homage to Hendrix’s hand-painted original, giving fans, players and collectors the chance to own a modern classic. 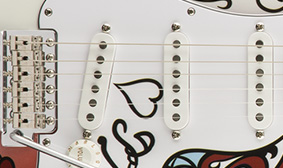 This instrument features single-coil Stratocaster pickups that evoke the sound and style of classic Fender guitars from the ’60s.

The ’60’s-style neck has a comfortable “C”-shaped profile, sculpted to impart a vintage-style playing feel. 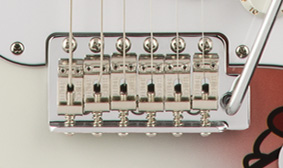 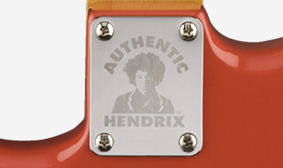 The Monterey Stratocaster has a custom neck plate featuring an engraved image of Hendrix. 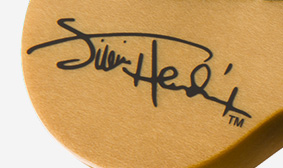 The Monterey Stratocaster features Hendrix’s signature on the rear of the headstock.