View cart “Andries De Jager Concert Classical 1983 Cedar Top Indian Rosewood back and sides” has been added to your cart.

Andries De Jager worked in the JMG workshop in WA during the 1950s after emigrating from Holland in 1952.

Following the closure of JMG, he made and sold classical guitars under his own name and was one of Australia’s first makers of concert classical guitars built to a standard that equalled the concert instruments being built elsewhere in the world.

He had a workshop which built other ‘student’ guitars and string instruments, as well as building other styles of guitar himself, such as this one https://www.facebook.com/marketplace/item/230277431255507/

Dutch-born master craftsman Andres de Jager has contributed largely to the birth of a new musical instrument in Australia – the classical guitar. He has made more than 100 fine classical guitars and hundreds of less specialised instruments since he came from Holland in 1952. Orders come to his shop in Perth, WA, from all over Australia and New Zealand. He spends many hours on each instrument, cures the woods and prepares them for carving himself. He also repairs instruments for the Western Australian Symphony Orchestra. Mr de Jager at work on a guitar

This amazing instrument is a 1983 luthier built concert guitar (not one of the workshop or student guitars), cedar top with Indian rosewood back & sides.

I also think the tuners might be Landstorfer – they certainly feel excellent quality. 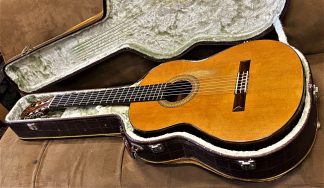